If you’re interested in finding an osteopath in Edinburgh, then read on…

Gavin graduated from the British School of Osteopathy as the Gold Medallist in 1991.  He was a Vice Patron of the School from 2005-2015.

After practising in New Zealand for a year, he returned to his native Scotland.  And became the 6th osteopath in Edinburgh in 1992.

Gavin established his practice, “Edinburgh Osteopaths” in 1992.  Later changing to “Active X Backs” in 2000.  At this time there were 4 clinics spread through East Central Scotland.  Active X Backs also provided osteopathic services to a number of large employers.

Gavin gave up the opportunity to study for a Masters Degree in Occupational Health in 1996. And instead turned his attention to writing his first book on low back pain.  He did this in collaboration with Gavin Hastings OBE – the international rugby player.  The Back Book was published by Thorsons in 1997, and re-printed in 2000 as Self Help for Backs.

In 2017 he self-published his second book on low back pain; Active X Backs, An Effective Long-Term Solution to Lower Back Pain. 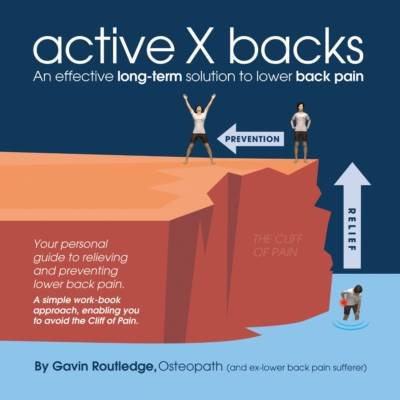 Osteopath in Edinburgh with a Masters Degree in Pain

Gavin completed a Masters Degree in the Clinical Management of Pain at the University of Edinburgh in 2015.  He focused on scoping the “optimal digital intervention for low back pain” in his final project.

Since then he has been iterating on the development of  a digital health intervention for low back pain. His goal is to help a million people relieve and prevent future low back pain.

Gavin still practises as an osteopath in Edinburgh 2 days each week.  You can book an appointment with him here.